LANCASTER – For the first time in 150 years, St. Mary Church in Lancaster is getting a new roof.

“The original slate roof was put on when the church was built and through the years repairs have been made,” said St. Mary of the Assumption Church Father Craig Eilerman. “But over the years, the slate becomes brittle and becomes more dangerous and tougher to make repairs.”

Eilerman said the original slate roof was put together with hand-made nails. 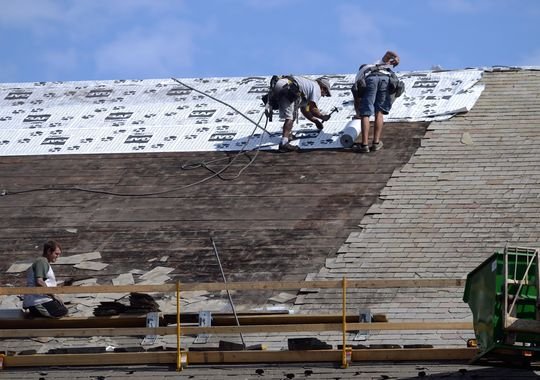 “It’s quite possible the steel nails were made on the site, like the bricks were,” Eilerman said. “But they have rusted and the copper flashing and ridges have deteriorated.”

Eilerman said the parish Administraiton and Maintenance Committee decided to replace the roof with another slate roof.

“We felt that if the last one was able to last 150 years, we might as well stick with the same roof,” Eilerman said.

The new slate will be Vermont Unfading Green and the contractors will install the tiles in a random pattern.

Workers cover the oak board decking with a protectiveBuy Photo

Workers cover the oak board decking with a protective covering and sort through slate shingles Friday at St. Mary of the Assumption Roman Catholic Church in downtown Lancaster. Rogers Roofing workers were taking the 150-year-old slate shingles off to begin the three- to four-month replacement. (Photo: Matthew Berry/Eagle-Gazette)

The new slate on the roof will weigh approximately 56 tons with 350 pounds of copper nails. They also plan to install 1,200 snow guards to prevent the snow from falling down on the sidewalks and grounds during the winter months.

“The wood underneath the slate roof was made of huge oak planks that probably came from trees around Lancaster,” Eilerman said.

Rogers Roofing, of Westerville, is the contractor for the project. Eilerman said the contractors and the parish administrator will work together to make sure the work on the roof will not interrupt daily masses, funerals or weddings.

“We had that in reserve fund and will be looking to build up that fund again for future major projects,” Eilerman said.

Eilerman said the project should take between three or four months to complete. The parish has approximately 1,400 families.